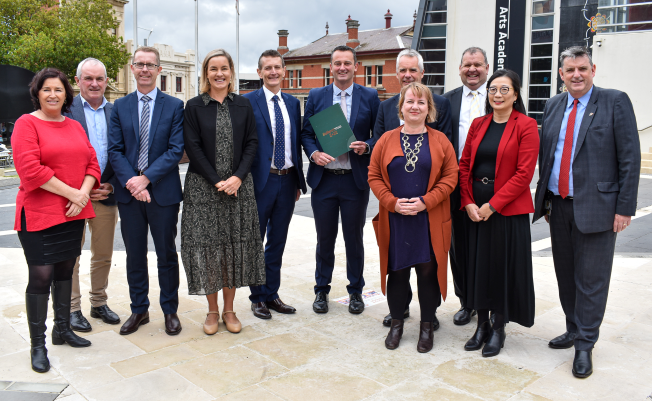 Six transformative projects for our city and region

With the 2022 state election fast approaching, Committee for Ballarat together with the City of Ballarat, Grampians Health Services, Federation University, and ACU, Sovereign Hill, Central Highlands Water, Ballarat Regional Tourism and Commerce Ballarat, are ‘doubling down’ on our commitment in support of the six transformative projects for our city and region, known collective as Ballarat Now and Into the Future 2022.

These projects were formally announced in April though the Government advocacy started long before that.

The ‘expansion’ of the major events precinct for MARS Stadium and its surrounds has been confirmed with the announcement of $150m as part of the Commonwealth Games. We are delighted with this significant investment and that it has bi-partisan support.

The Liberal/National Coalition has recently announced, if elected, they would commit funding to duplicate Dyson Drive between Remembrance Drive and Ballarat-Carngham Road first and begin planning the further stages to the Glenelg and Midland highways.

Readers will also be aware the Liberal/National Coalition had committed $27m towards the next stages of Sovereign Hill’s Master Plan development, back in January 2022.

As we move into the election campaign proper, we look forward to further announcements regarding our BNIF projects, championed by our health, education, tourism, local government, business, and infrastructure sectors.